The question of how Mark Smich and Dellen Millard came to be best friends has been asked many times since the two men were charged in May 2013 for the first degree murder of Tim Bosma, a crime of which they were eventually convicted.

In one of his letters from jail to his girlfriend Christina Noudga, Millard wrote: “Some people gave food to food banks, some people donated money to the homeless, and some people spent months in africa building homes. Mark was all three rolled into one for me.”

Smich’s girlfriend Marlena Meneses testified at his trial that she believed Mark was “in love” with Dellen, who had promised to help him fulfill his desires to be a rap star.

Although Smich was commonly perceived to be Millard’s follower, when he took to the witness box at their joint trial, he pointed the finger straight at Millard, saying he alone had murdered Tim Bosma.

Smich proved a self assured witness whose story was believed by many. During his four full days of cross examination by Millard’s lawyer, Nadir Sachak, there were many testy encounters between the two. At one point Sachak asked Smich to rap for the jury, Smich’s lawyer Thomas Dungey quickly objected, and the judge agreed, telling the court, “He can read, but I don’t think he has to perform it.”

Smich then read aloud the lyrics he had written:

Its me muthaphuka, so relentless
Runnin from cops outta them spots, over them fences
Im high so im half fuckin demented
But i still
gotta get away nice and splendid
Got my 9
So im runnin like its nothing … Till im dead, kid!
I am not unstoppable
but I like to live my life without the cops involved
Its not probable, but if it happened to me … . Problem solved!
Im just comin for the loot, so shoot first, i come for your new purse, and wallets, I
want some chronics, and that juice cuz ima alcoholic,
No stallin, give it to me in a quick haste, more speedy then fast paced,
Im runnin away from the police in a cash race,
First one, im never last place

The creation date for this particular lyrics file on Smich’s iPad was February 16, 2013, while the date for last modification is May 21, 2013, the day before Smich was arrested.

When Sachak erred in referring to a date, Smich pounced on his mistake. “Could be one those brain cramps,” he said. “You’re probably under a lot of stress.” The comment didn’t fit with Smich’s portrayal of himself as the victim of his powerful friend’s crime, but it provoked laughter in the courtroom and was much remarked upon online by those following the trial live on Twitter.

“Zing,” wrote “meterclicks” on Websleuths. “MS is giving Sachak a taste of his own medicine this morning.”

“Oh snap LOL,” wrote “Kamille.” “MS should have been a comedian LOL.”

“Interesting. I’m starting to believe that MS is not as dumb as what I first thought,” said “Redheart.”

“Smich is getting sassy,” wrote “Katpaws.” “I’m still fully on the fence about MS’s role, but I’m not a fan of Sachak’s style at all … so I can’t help but take a little delight in MS’s quick comebacks. Clearly cleaning himself up has revealed a more clever and quick-witted guy than we initially realized.”

Undeterred by Smich’s retort, Sachak asked again what exactly Smich modified on May 21, 2013.

Smich explained instead that adding one letter or a space would cause a file’s modification date to change.

Smich gave a lengthy account about how Meneses could have used the iPad and caused the modification. He repeated his explanation about inserting a character by mistake, adding that the file could have been opened randomly.

Sachak cut him off. “I don’t need to know how an iPad works,” he said, looking at the jurors as if to say he shared their pain. “Just tell me, What did you modify? Please help me. Please answer that question.”

You can read the full story of Smich’s testimony in my book, Dark Ambition, due out in November 2016. 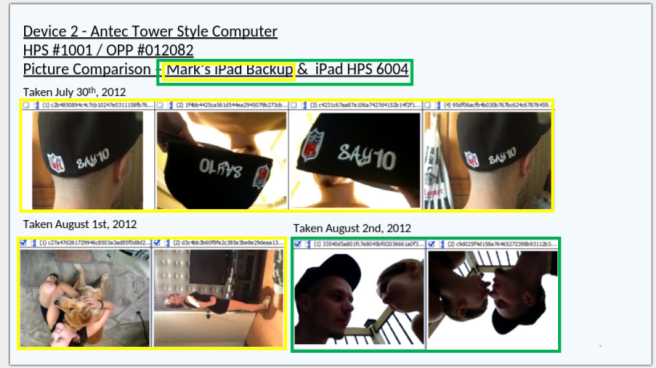 This photo is from evidence presented at the trial of Dellen Millard and Mark Smich for the murder of Tim Bosma.

I will be posting the full PowerPoint as soon as possible.

I’m off to Hamilton for the first day of the Tim Bosma murder trial, which starts tomorrow with jury selection. The accused are Dellen Millard and Mark Smich, who are both pleading not guilty.

Millard spent the last two weeks in Toronto court attending the preliminary hearing for the Wayne Millard murder case. Justice Diane Oleskiw will rule on March 4 whether Dellen will stand trial for the first degree murder of his father, Wayne.

If you’re wondering why the press hasn’t mentioned certain issues, I have two words for you — publication ban. The run-up to a trial is always a very sensitive time. However, do remember that publication bans are temporary and will eventually be lifted.

And finally, if you’re like me, you probably shake your head at a lot of courtroom sketches that barely resemble the accused — or anyone else, for that matter. Well, I just discovered a really good sketch artist, Alexandra Newbould. Check out her work, including the Millard sketch above, on Twitter. I shrunk it down to thumbnail size so as not to violate any copyrights. You have to click to see it in its full glory on the artist’s Instagram.

I’m writing a book for Penguin Random House on the murders of Tim Bosma, Laura Babcock and Wayne Millard. If you want to keep up with news of the upcoming Bosma trial and my book, please subscribe to my newsletter:
Enter your email

Some background on Justice Andrew Goodman, the new judge in the Tim Bosma murder case, according to his alma mater, the University of Ottawa. He used to be a cop with the RCMP:

Two Common Law alumni, the Honourable Andrew J. Goodman (’91) and the Honourable John P.L. McDermot (’80), have been appointed to the Superior Court of Justice of Ontario. The appointments took effect on October 29, 2010.

Justice Goodman will preside in Milton, Ontario where he has been an Assistant Crown Attorney since 2000. He previously worked for the Royal Canadian Mounted Police Service from 1977 to 1997, serving first as a police constable, then as a detachment and unit commander and finally as a legal representative in Ottawa.

Justice Stephen Glithero removed himself from the case last week for health reasons.

Justice Goodman is now based in Kitchener.

Pre-trial motions in the Bosma case go ahead again today in Hamilton.

Update: My book, Dark Ambition, went on sale November 8, 2016. It is temporarily sold out at Amazon.ca, but you can buy it at online at Chapters/Indigo and in person at major bookstores and Costco. Dark Ambition tells the story of the Tim Bosma murder investigation and the trial of Dellen Millard and Mark Smich.

Here are what I consider the best background articles related to the Tim Bosma murder trial (scheduled to begin in January 2016) and the accused, Dellen Millard and Mark Smich, who are both pleading not guilty:

Suspect in Tim Bosma’s death was always ‘a little different’ and did ‘odd stuff’ at private school, classmate says From the National Post, an excellent look at Dellen Millard’s background from very early on in the case, when people were more willing to talk. One of the odd things he did was showily eat dog biscuits straight out of the box.

Tim Bosma: The Painful Search for a Missing Man This Toronto Star article is an insider’s look at how Sharlene Bosma and Tim’s friends tried to find him after he went missing. It’s powerful and heartbreaking.

Whoever killed Bosma is abusive, exploitive and a risk-taker: profiler James Van Allen, former head of the OPP’s criminal profiling unit, tells the Hamilton Spectator that Tim Bosma’s killer is someone who is exploitive, abusive, lacks any empathy and is a risk-taker.

Tim Bosma’s murder may have been “thrill kill”: source This Toronto Sun article, which appeared early on in the investigation, has stood the test of time. It provides details, then unknown, on the death of Wayne Millard and Dellen’s alleged purchase of a portable livestock incinerator.

Dellen Millard’s jailhouse interview with the Toronto Star Millard reveals some of the details of his arrest in this exclusive interview with reporter Robert Cribb. He says he didn’t kill Tim Bosma and “they might as well accuse me of having been to the moon.”

The deaths of Laura Babcock and Wayne Millard The Hamilton Spectator reports that homicide detectives believe Dellen Millard bought a gun illegally and used it to murder his father. And that he also murdered Laura Babcock and incinerated her body — just as he allegedly did with Tim Bosma.

The downward spiral of Laura Babcock A really good investigative piece by two Toronto Star reporters, who reveal what went on in the troubled last months of Laura’s life.

And now, here are my articles on the murders of Tim Bosma, Laura Babcock and Wayne Millard:

Declining Dynasty: How Dellen Millard dismantled the family aviation business Although Dellen never had much interest in Millardair, his father Wayne was determined to revitalize it — until his sudden death.

Toronto Police investigations into Dellen Millard: What went wrong? A year after Millard was arrested for the murder of Tim Bosma, he was charged with the murders of Laura Babcock and his father, Wayne. It raises the question: If Millard had been in custody sooner, would Bosma still be alive?  (Published in the now defunct, Grid)

Dellen Millard’s letters from jail The letters reveal a man with a flair for purple prose and expensive taste in clothes — should he wear an Armani or McQueen suit at trial — coping with jailhouse horrors such as a prisoner revolt and fighting to stay optimistic.

I’m writing a book for Penguin Random House on the murders of Tim Bosma, Laura Babcock and Wayne Millard. If you want to keep up with news of the upcoming Bosma trial and my book, please subscribe to my newsletter:
Enter your email