Earlier today I was listening to reviews of the new HBO series, Deuce. It reminded me of an interview I did with Harry Reems for the McGill Daily and which I found online. Le voilà: 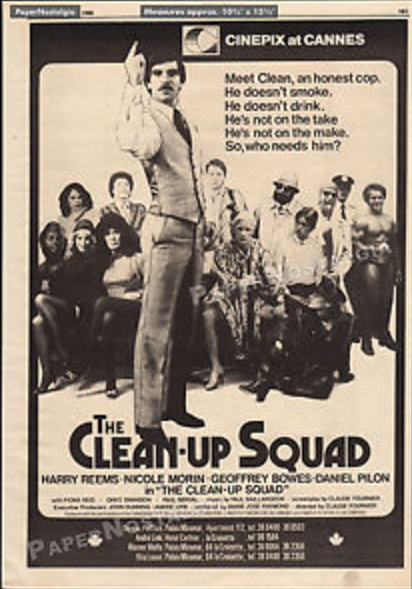 A former McGill student working as a receptionist In the hotel In which Reems Is
staying identifies him for the press.

“The Dally has to Interview hlm. I was talking to him earlier. He’ll probably give you an interview If I ask him. “Let me try.”

She hurries across the room to talk to a slim man In jeans and a light blue T-shirt.

The answer is affirmative. Reems has consented to the Interview but not until later
that night.

“And do you know what?” the receptionist asks. “He asked me out.”

“Well are you going?” I inquire, hoping for an exclusive story on the date.

“No! But look he’s coming over here.”

She Introduces me to Reems who tells me to meet him on the set later. “The set” for the filming is McTavIsh Street, Peterson Hall and the Union building garage.

The movie, Reems’ first “clean role” is called Squad. Reems plays a get tough vice
squad officer who has just finished tidying up one metropolis and has moved on to clean up another. His title is Chief Maclean. His underlings call him “Mr. Clean”.

In the scene being filmed a gay beach party has just been raided and a bus load of the merry makers are being taken to vice squad headquarters.

Reems, who is not part of the scene, talks about the films. Squad is an all Canadian venture and Reems is the only non-native cast member.

He likes Montreal but finds he’s not as recognized here as he is south of the border.

As for his future In film, Reems hopes to make more “non-adult” movies. A highly
publicized suit against him for his supposed role In the distribution of Deep Throat has
caused him alot of personal anguish and he has no desire to repeat the experience.

The suit, however, has made Reems a household name and something of a folk hero.
He admits, though, that the frequent learlng remarks and off color jokes sometimes get to him.

Reems has had problems with the press: “They always ask the same questions, again and again.

’Do you feel exploited?’ ’How do you keep it up when you’re filming?’

“I wish that just once some one would ask me something really Interesting. Then they
would have a really good story.”

“Alright then, have you kept In touch with Linda Lovelace? Do you know what she’s doing these days?”

Reems hasn’t heard from his notorious Deep Throat co-star ‘but he’s heard through the grapevine that she’s married to a gynecologist in Arizona.

A co-star backs him up.

“Yeah I’ve heard the same thing,” he says.”But I heard she was living In Nevada.”

A student In a tennis outfit Interrupts and asks Reems to autograph his racket cover.

“My girlfriend will get a big kick out of It,” he says.

Reems signs the cover “keep on strokin’, love Harry Reems.” Later that evening another student asks for Reems’ John Hancock. He signs “keep It up, Harry Reems.” And when Reems is asked how he likes Montreal he replies: “Montreal, I lust you Montreal.”

After about ten minutes the originally ebullient Reems becomes fed up with the
interview. He’s angry because I don’t know the details of his background and his court trial.

He’s angry because I’m a reporter. “The press sometimes exploit me. But I’ve never felt exploited by any of the films I’ve made,” says Reems.

He retreats Into his furnished van. The interview is over.