Skip to content
As a Canadian journalist who follows new media news, my curiosity was seriously piqued by the announcement last March that American Capital, a Maryland-based VC firm, was investing $US160 million in Geosign, an internet publishing company in Guelph, Ontario I’d never heard of nor apparently had almost anyone else.

The press release read: “With hundreds of web sites in 20 categories, Geosign attracts over 35 million unique visitors to its network of sites on a monthly basis.”

To which my first reaction was, “That’s crazy. Instapundit — a one man blog, albeit a very successful one — has been getting around five million visitors. Based on the American Capital investment, he’d be worth $23 million.”

What’s more, Geosign’s marquee sites — including dietnation.com, nomadik.com and think.fashion.com — looked like ads (or at the very best advertorial), failed to show up high in Google searches for obvious key words like diet, hiking and fashion, and, unlike Instapundit, were bookmarked by very few people, if any, in del.icio.us, indicating a low regular readership.

It must be about the technology, I figured. That American Capital press release had also quoted Virginia M. Turezyn, managing director of its technology group, saying: “Geosign is ideally positioned for continued expansion as the Internet claims an ever greater share of consumers’ time and advertisers respond by steadily increasing their spending on the Internet. Geosign has built a first class Internet technology platform (italics mine), from which it can continue to build on its position as an Internet media and marketing leader. In addition, Geosign has a talented and entrepreneurial management team that has demonstrated an outstanding ability to respond and adapt to a fast changing market.”

All very well but strange that there was nary a mention of any exciting new technology in this brotherly love fest of an interview with Geosign founder Tim Nye conducted by “domainer” king Frank Schilling, who now lives in luxury in the Cayman islands after making a fortune wheeling and dealing in internet domain names. The interview is a classic of the genre — incomprehensible gobbledy gook mixed with adulation from groupies who can’t distinguish between someone who has made a fortune for creating something of value and use, and someone who has made a fortune from speculation or getting lucky, at the expense of a bunch of other poor saps.

It was scary to me to think that guys like this are getting big money to “publish.” For all its many faults, old media has never been a place for people whose sole goal in life is making a buck.

Still in the interests of trying to find out more and possibly landing a writing gig with a company that looked like it could really use some help with its content, I applied for work at Geosign. I had a telephone interview with a clueless HR person/recruiter in early May, never heard back, and became preoccupied with other stuff. It wasn’t until mid-June that I read that Geosign was laying off large numbers of its staff despite the fact its website still said it was hiring.

The rumoured explanation of preference was that Geosign had been caught in a so-called arbitrage crackdown by Google, that it had been buying ads to drive visitor traffic to its sites and then profiting hugely when the visitors clicked on different ads on the Geosign sites. That still didn’t make sense to me though. First, I doubted the Geosign sites could make any significant money this way, and second, they didn’t seem any worse to me than a lot of other sites displaying Google ads. After all, any publisher that doesn’t sell anything other than ad space would be considered an arbitrageur according to this rather loose definiton.

The answer it seems is slightly more complicated. Along with the 200 sites and the big domain names like hockey.com that it talks about, Geosign also owns — through a subsidiary or associated company by the name of NYCGroup.com — some 90,000 other domain names including stuff like canadianrockiestour.info and myrtlebeachresortdirectory.com. If you do a “who is” search , these sites are affiliated with NYC Group, which is none other than Geosign.

These sites are designed in a similar Geosign manner. There are no ads on the landing page and if you’ve ever landed on a page like this, your likely first reaction is confusion. “Huh? What is this? How did I get here?” Most likely you’ll also opt for the simplest way off with minimal mouse action, namely clicking on one of the links, which will bring you to a second page filled with ads or “sponsored links.”

Every click to get out of this maze earns Geosign money, a business that can be profitable with as few as 10 visits a day per page. Given the number of domains Geosign owns, it’s got itself a perfect long tail speculative business. If it gets 20 cents for every click with 10 clicks on every site times 90,000 sites, that’s $5.4 million in a month and all it has to do is pay the next-to-nothing overhead for a bunch of junk sites

Every click also earned money for Google, which apparently used to allow its ads on Geosign sites in contravention of its own rules, and Yahoo, who apparently still does. The crackdown appears to have been prompted by fed-up advertisers who found that potential customers arriving from junk sites like Geosign’s had lower “conversion rates” than customers coming from content-rich sites. In other words, someone reading about the Rockies on a site about Canadian bears and moose would be more likely to book a flight than someone who just clicked on the ad to get away from internet profiteers. Advertisers, many of whom are small buinesses, are prepared, it seems, to pay to advertise their products but not to pay extra for the privilege of merely enriching Geosign, Google, Yahoo and American Capital. Not to mention the millions of information seekers who are coming to distrust Google ads thanks to junk sites like Geosign’s.

Unfortunately, no one at Geosign or Google or American Capital would agree to talk to me about this story and answer the questions of why anyone would invest $160 million in a company like Geosign or what exactly makes it so special or how this racket went on as long as it did and still does. Sure, there’s chatter on the net but the MSM is ignoring things so far and there are still suck-up interviews appearing like this one with Geosign CEO Ted Hastings where he plays that elusive technology card, saying: “The company has designed some incredible systems [that] track where the user has come from [and] if they converted for the advertiser, all in real-time. Traditional online publishers can’t give those kind of stats back to their advertiser[s].”

At the same time, he’s also telling the Guelph Mercury: “We are no longer aiming to build a costly content and publishing empire,” adding that Geosign will now work to develop content that’s less expensive to produce. “We are also growing our lucrative search marketing business, which requires fewer employees.”

Curiouser and curiouser, but if I were an American Capital investor I sure wouldn’t be very happy about this deal or the fact that one of the NYCGroup’s great domain properties is thefart.com. 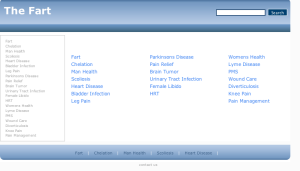